Frontiers clients appreciate the high level of service and professionalism our polite and friendly team bring into their homes… That’s because we only hire great people, then train them to be great builders.

Our in-house team members and contracted trade partners are invested, passionate and dependable craftsmen who love the projects they get to work on. 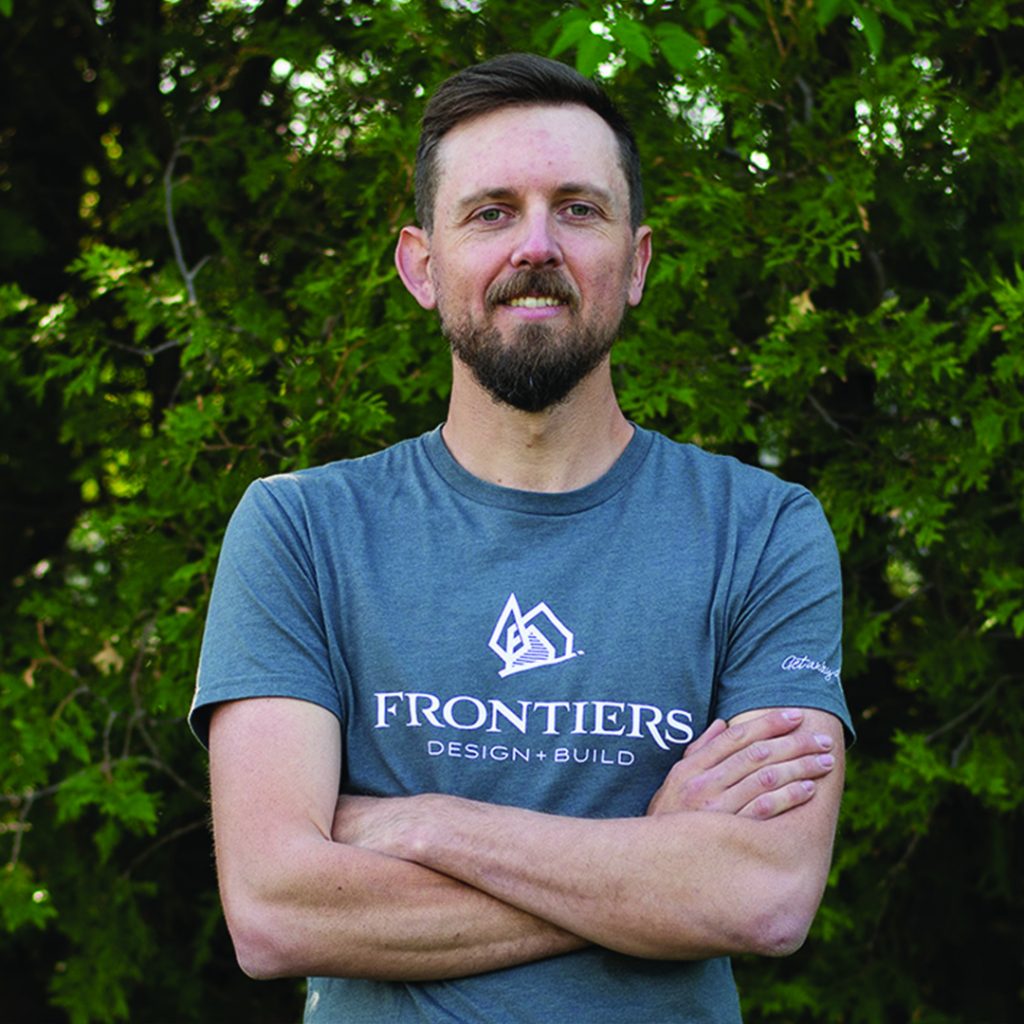 A proud University of Guelph grad, and professional landscape architect, whose design expertise and project management skills are crucial to the landscape team. Doug is the first point of contact for new clients looking to transform their outdoor spaces. His financial savvy, paired with his ‘farm boy’ work ethic has been integral to Frontiers’ rapid and continued success.

When Doug isn’t working, he enjoys a fine glass of scotch, smacking dingers out of the park with his softball team, and sending the cutest candid photos of his toddler Alina to everyone on his contact list. 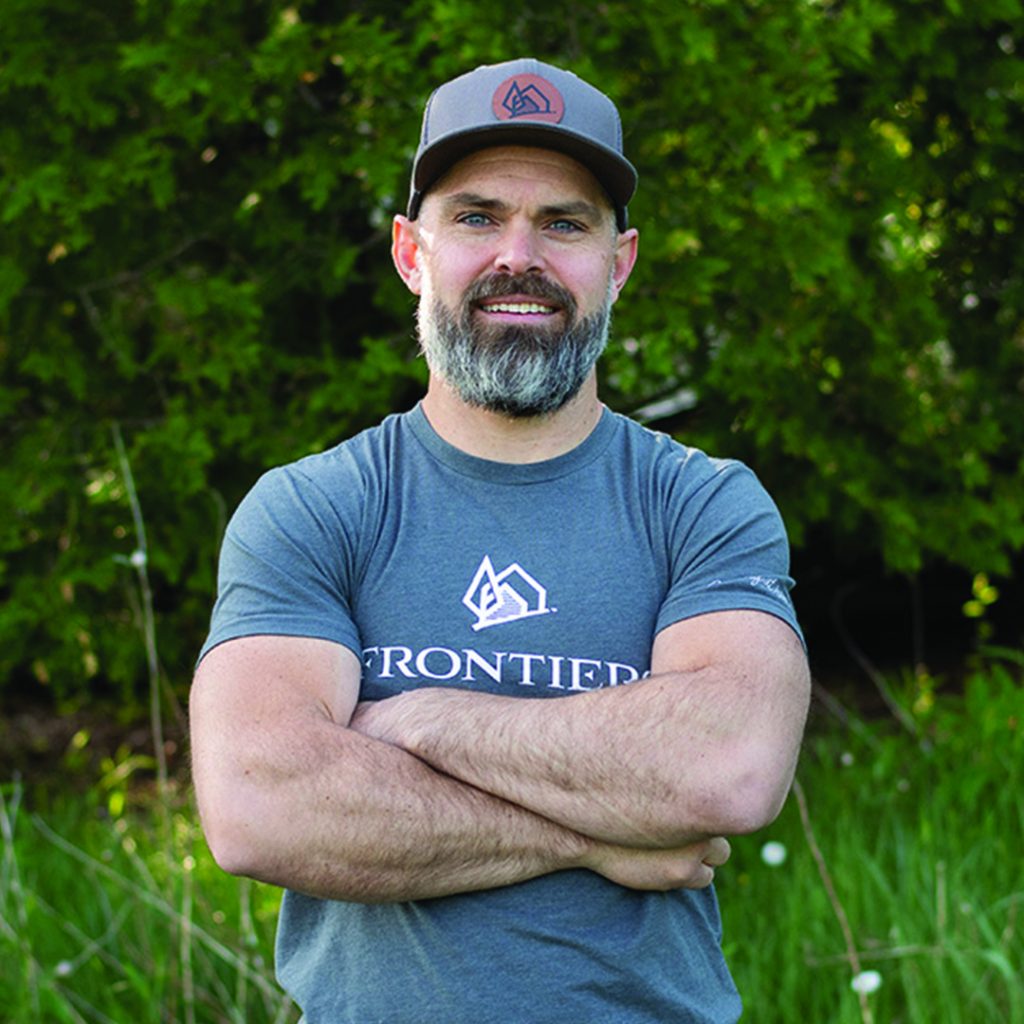 James manages the day to day operations of all home renovations and custom home construction – from sales and design, through project management and installation. He prides himself on being a perfectionist and is responsible for constantly raising the bar on quality and innovation. If there is a better way to do it, James is going to find it. In his limited down time, James is an active CrossFit athlete, enjoys organizing his wood shop, and hiking with his beautiful wife Katherine and dog Archie. 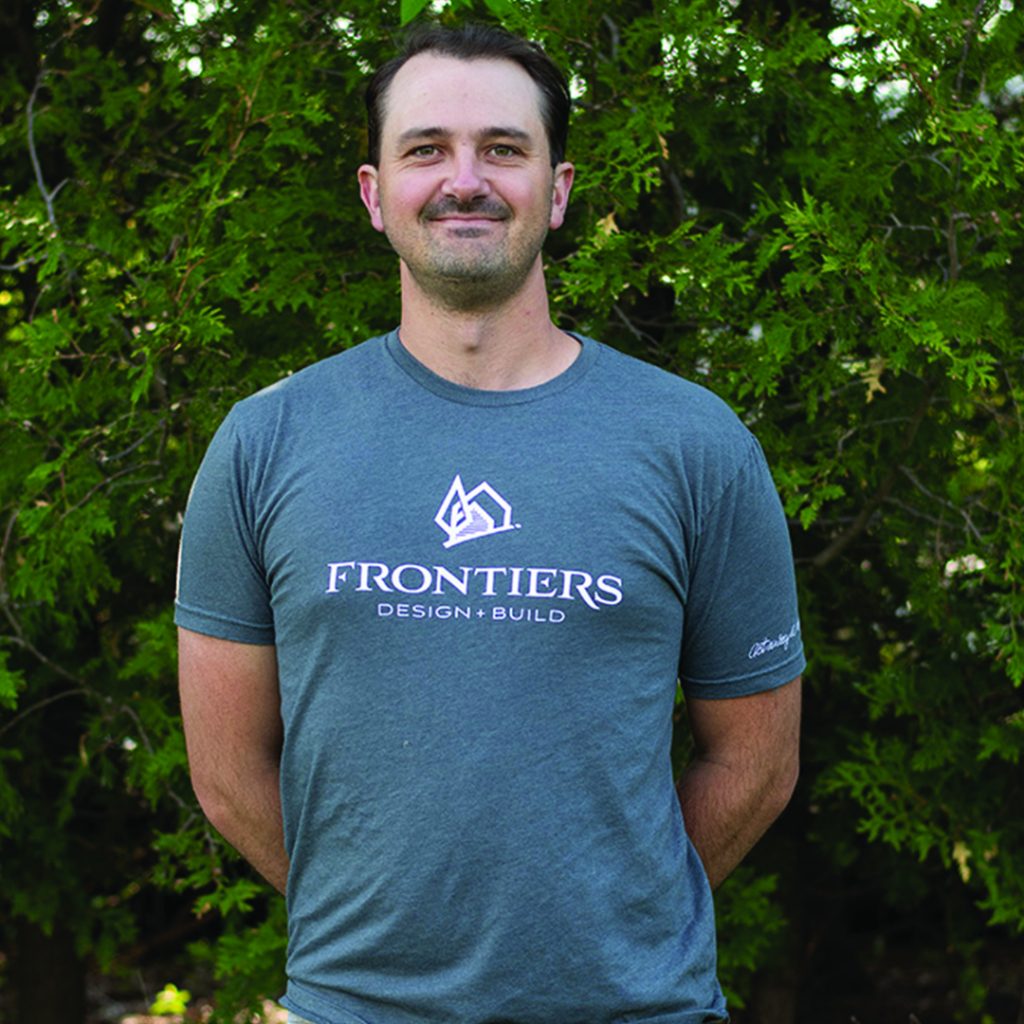 With a degree in Landscape Architecture from the University of Guelph, Adam has the design background to pair with his extensive construction experience. Growing up on a farm has given Adam the work ethic and grit to tackle many of the dirty jobs that come along with our industry. He is our fleet/equipment manager, and is also our problem solver. If someone has an issue, it’s Adam that usually gets the call. In his down time, Adam enjoys watching Gordon Ramsay on YouTube and replicating his dishes, and also has a mild addiction to trivia. 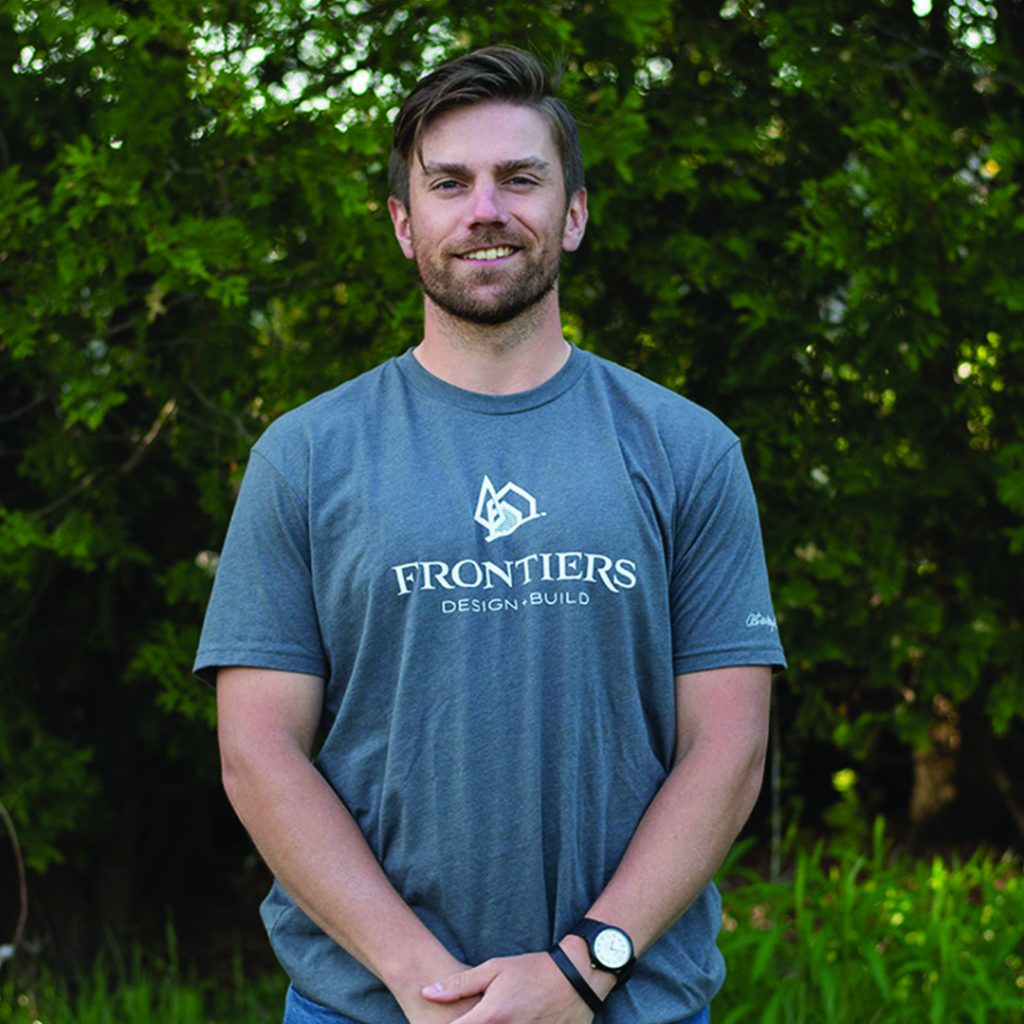 JR graduated from the University of Guelph with an undergraduate degree in Sociology, all while being a part of the Varsity Football Team. Initially his early time at Frontiers was spent performing tasks as a labourer for the Landscape division, but his skills have shifted focus. He now manages the day-to-day operations of the company as efficiently and consistently as possible. Priding himself on organization, transparency and hard work, JR has found a great fit in the team and is ecstatic to aid the continuing growth of the company. 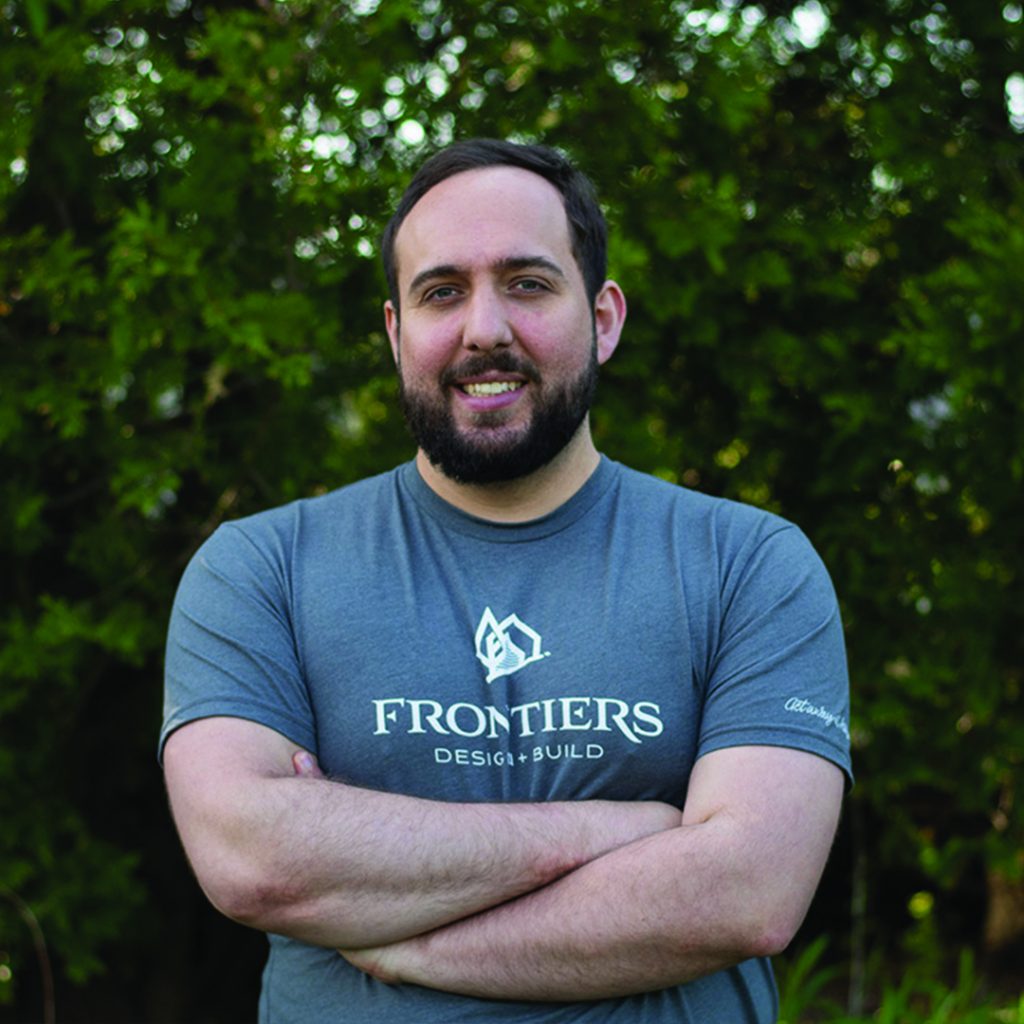 Mike is thrilled to be a part of the Frontiers team! After getting a BA at the University of Toronto, Mike went into home renovations where he learned a lot of the foundations of construction. Taking what he learned back to school, he later graduated from Sheridan’s Architectural Technology program and is now a designer with Frontiers. Mike is involved with all ongoing and upcoming projects at Frontiers, working on designs and drawings as well as currently working on completing his Building Code exams.
In his down time you’ll find Mike often playing with his dog, making fun foods and drinks with his wife, renovating their house, or playing hockey. With a strong passion for traveling he is always looking forward to the next adventure. 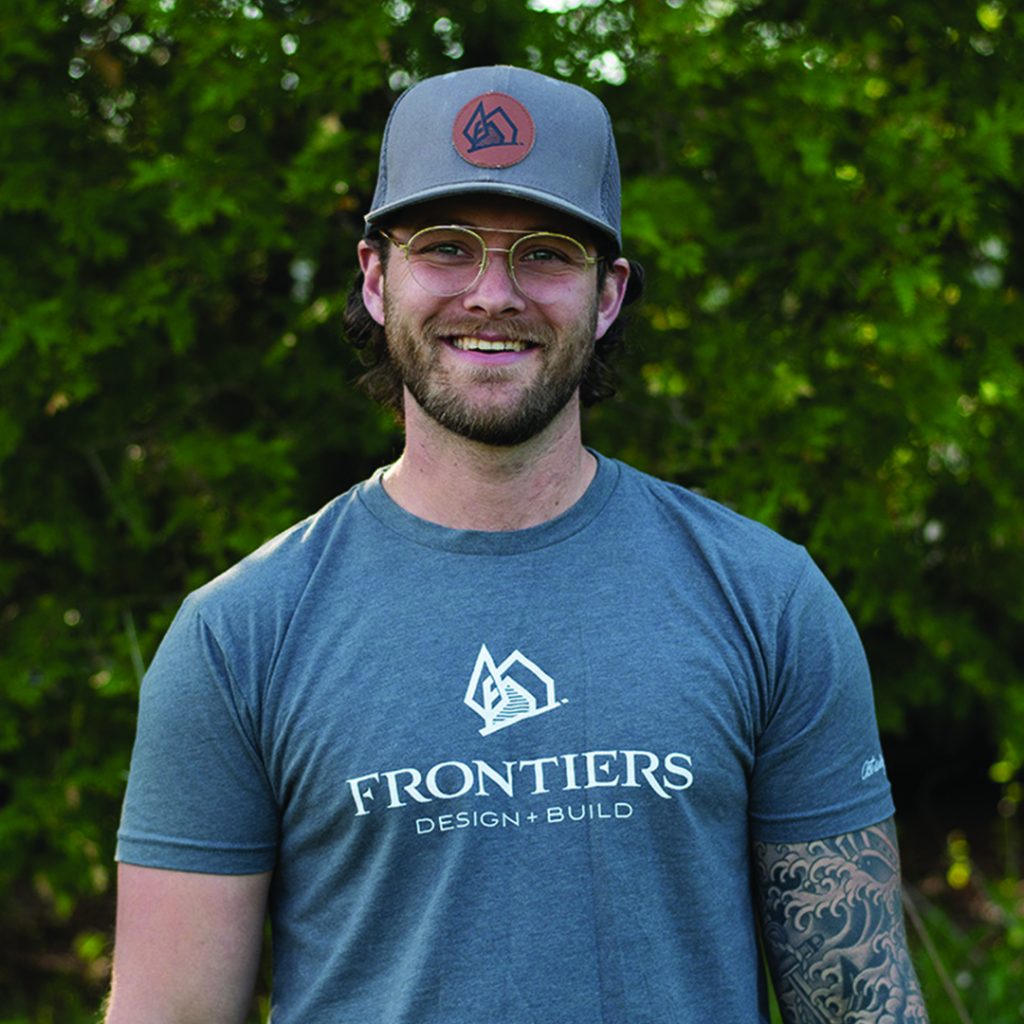 ‘Patterson’ holds a degree in Economics from Brock University. He eventually pursued a career in Carpentry, and found his way to Frontiers. Patt excels at finished carpentry, and often tackles detailed/precision work on our home remodelling projects. He is driven, and is always looking to tackle the next challenge. When Patt is not camping or spending time with his cat peanut, he enjoys watching a good baseball game. He has also been known to wear white jeans to work, which speaks to his high level of confidence…not everyone can pull that off. 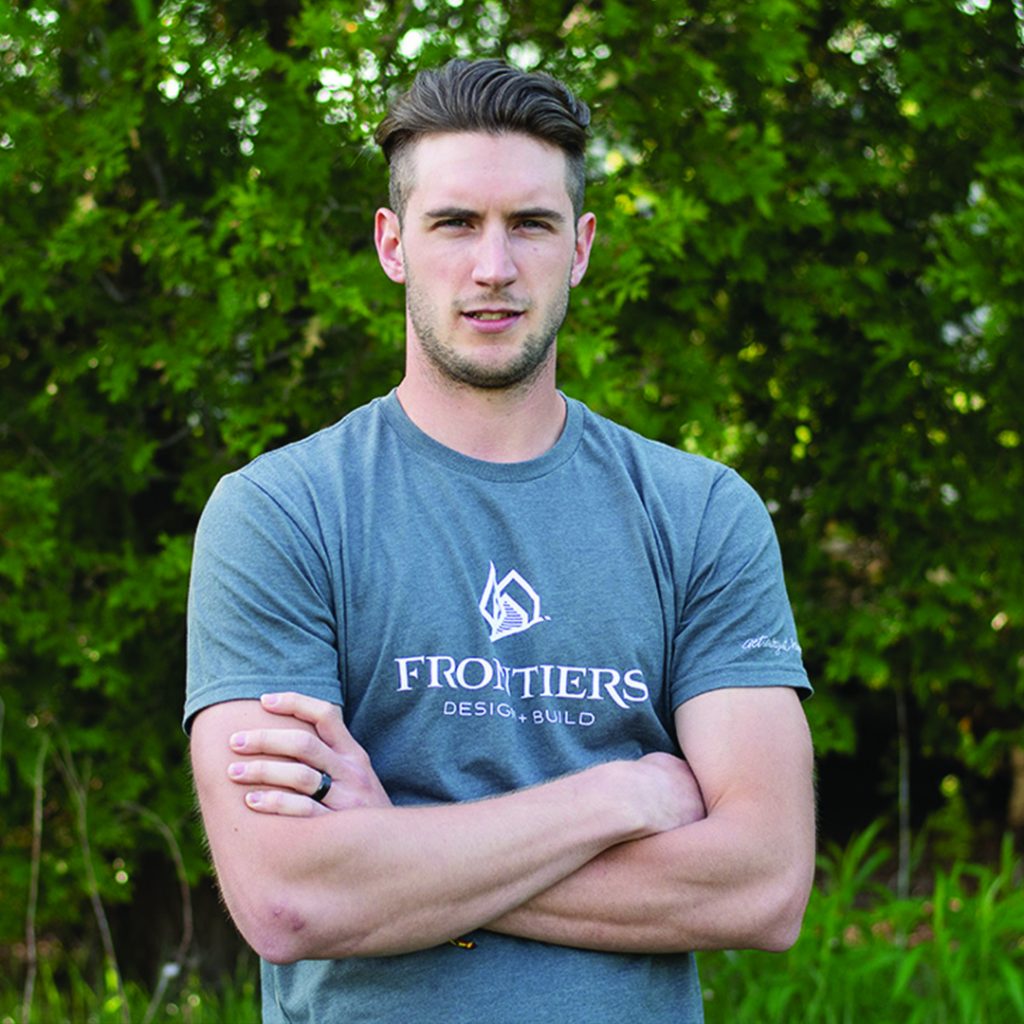 Drew is the newest member of the Frontiers design team – Drew attended Humber College and graduated with an advanced diploma in Architectural Technology. While in highschool and college, he enjoyed spending each summer landscaping, so he is not afraid to lend a hand on site if need be. Drew is involved in the small building projects and wants to work towards completing his Building Code exams (BCIN). Outside of work, Drew enjoys spending time with family and friends, sneaking out in his fishing kayak, hockey, and even the occasional camping trip. 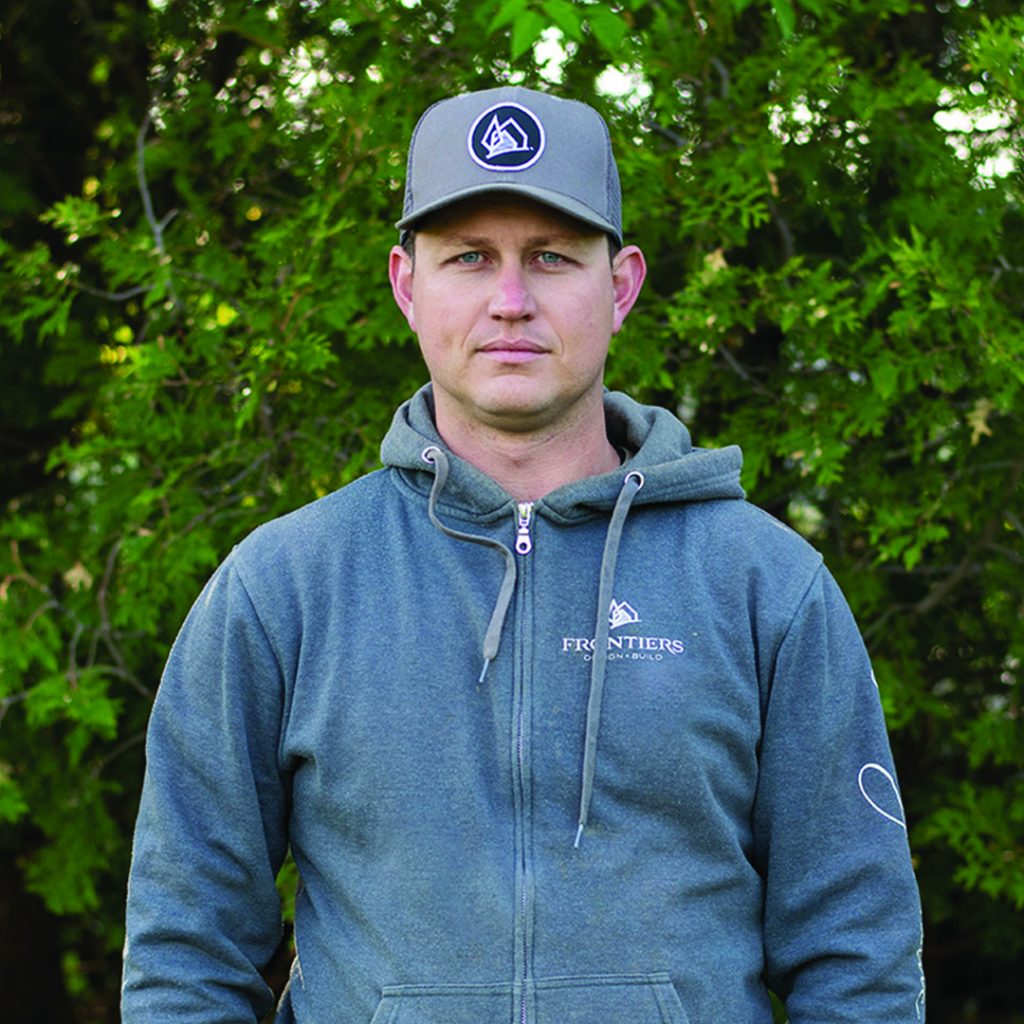 ‘Mac’ is a work horse, with a ‘head down’ type work ethic. You can’t stop this guy from a hard days work! Mac loves all things hardscape and equipment. Doing things right the first time is a point of pride for him – having to do it twice really grinds his gears. If you ask his friends, Mac’s downtime is hanging out with his dog while fishing up north – but if you ask Mac what he does between the end of one day and the start of the next, he’ll simply answer “I wait…”. 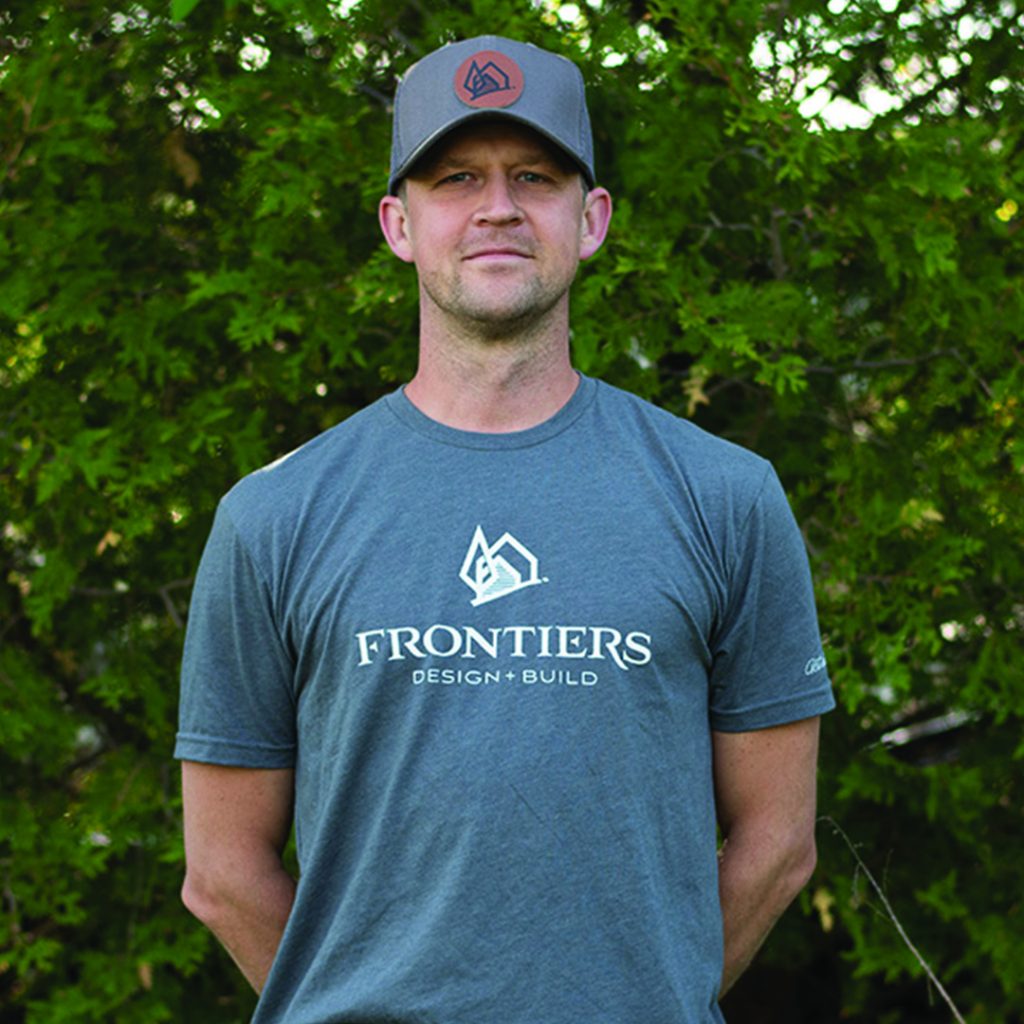 Jer has almost 15 years of experience in high end landscape design/build. His exceptional creativity and attention to detail has positioned him as one of our most talented installers. Jer also has serious design talent, and does concept work for some of our residential clients. His personal likes include beach volleyball, rock climbing and a nice scotch. His personal dislikes include potato eyes and sharks. 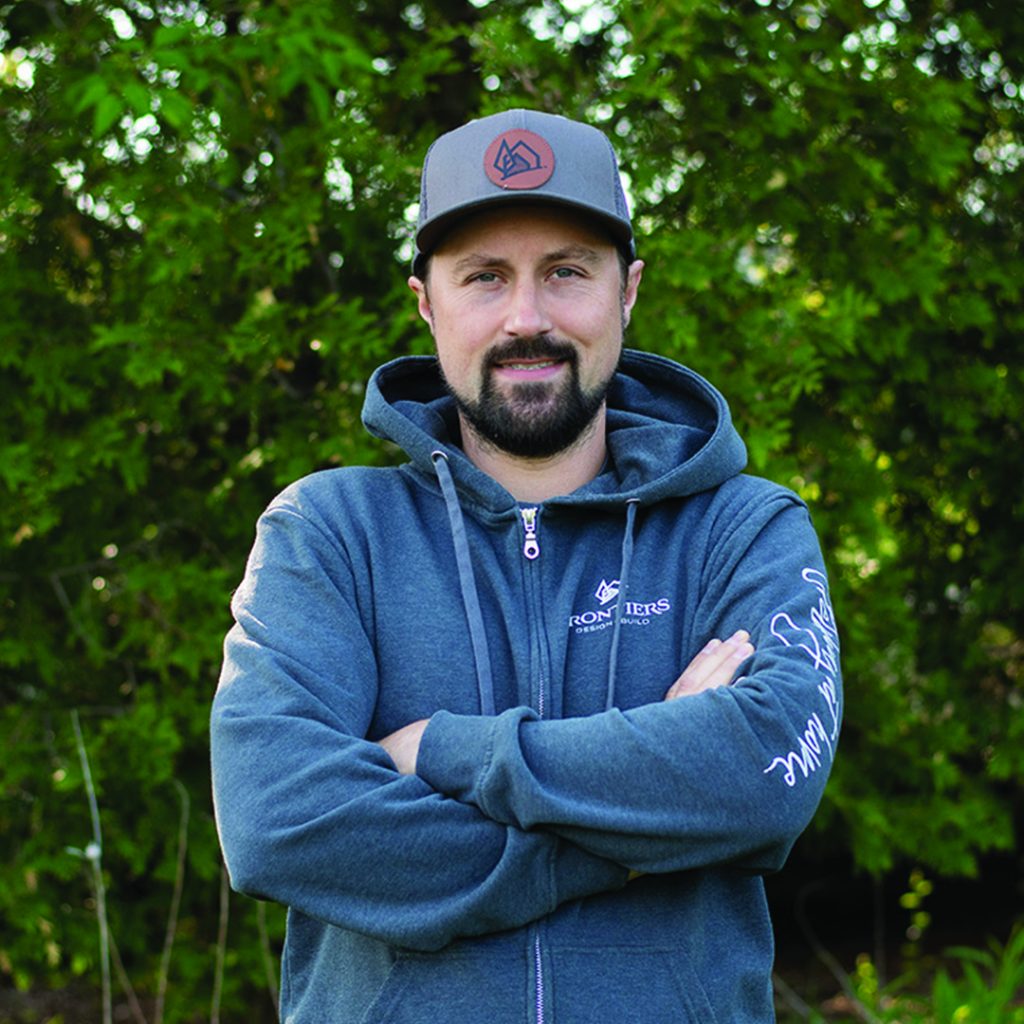 Born and raised in Toronto, Luke made the move to Guelph in the Summer of 2021 with his Wife and have since welcomed a baby Boy into their lives. Construction runs in the family for Luke, who’s Opa, Dad, and Uncle were all General Contractors. He helped his Dad during high school which is where he found a passion for building with his hands. After college, he had a chance to jump into custom home renovations and has never looked back. Luke enjoys disc golf, bird watching, craft beer, most sports, and fantasy football. He loves trying new things and meeting new people. 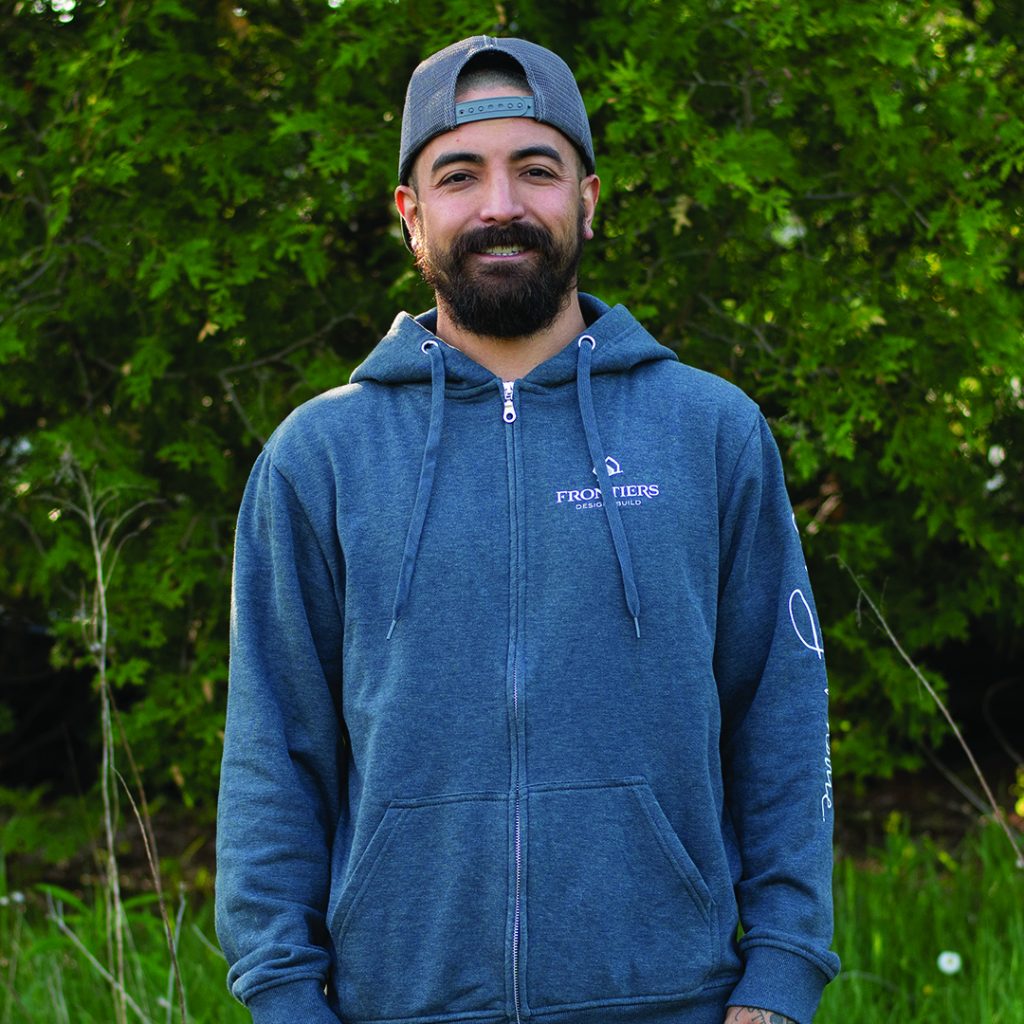 Mr. Dependable has missed very few days in the many years he has been part of Frontiers. Jesse has both a Marketing degree from Sheridan, and a Building Renovation Technology degree from Mohawk. Frontiers recruited Jesse right out of school, and he has developed quickly into one of our lead foreman. Jesse enjoys motorcycles, hiking with his dogs, camping and the outdoors. He also suffers from ‘nice guy syndrome’ – we are constantly asking him to stop being so easy going. It makes the rest of us look bad. 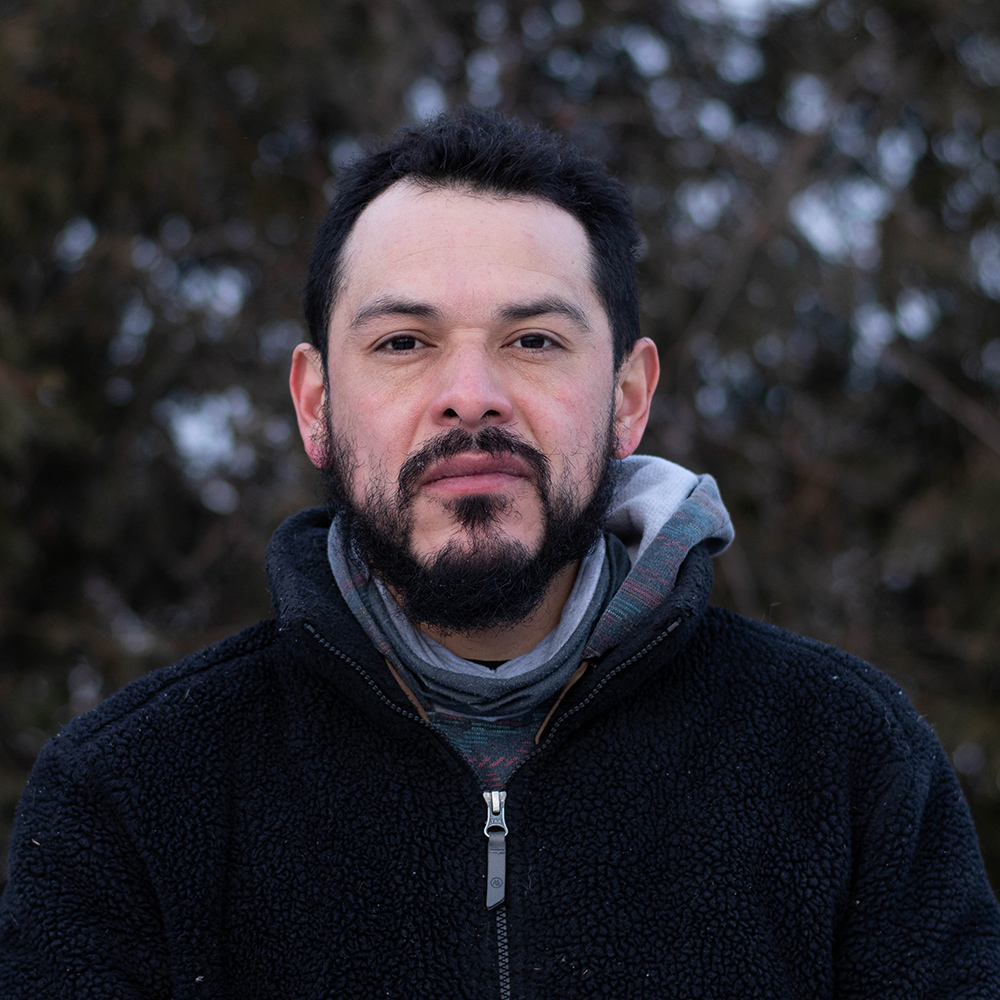 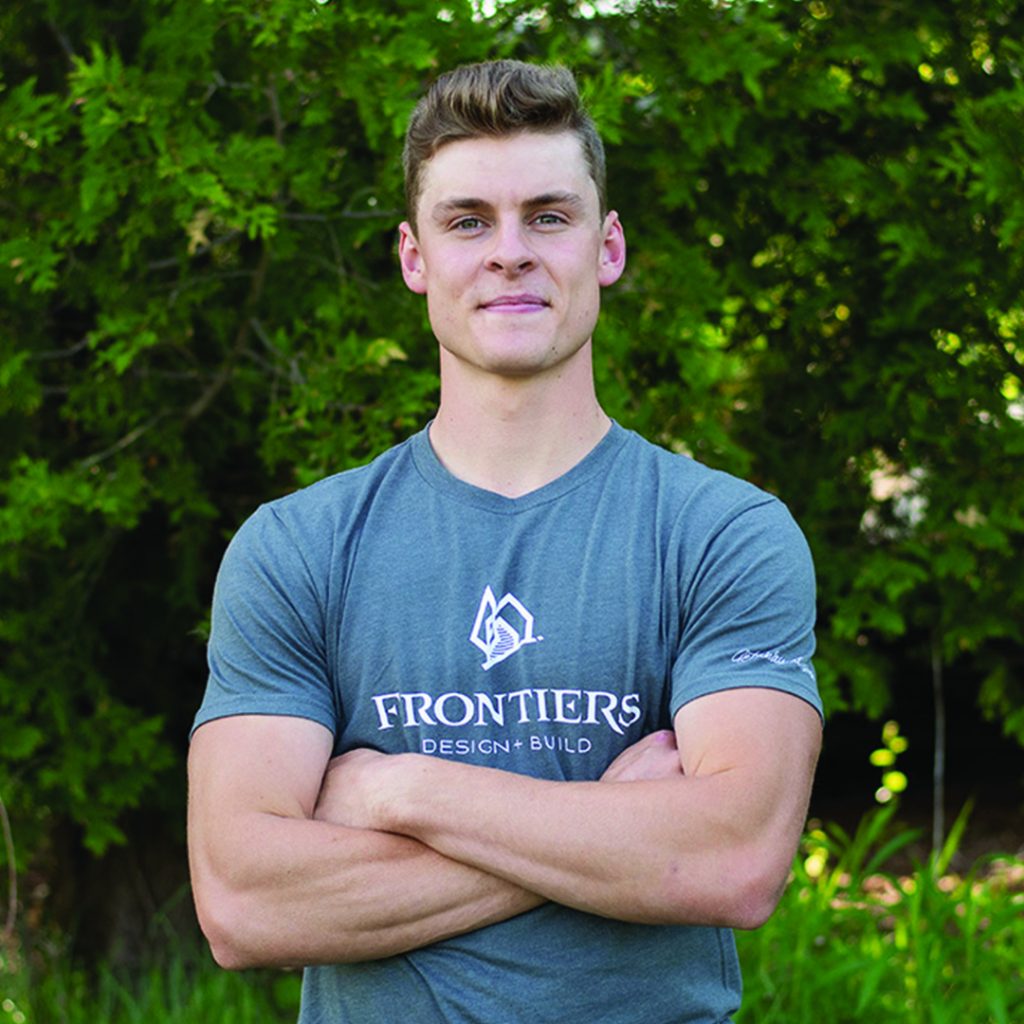 Luke is a young and enthusiastic team member. He loves to learn and accomplish as much as possible every day. His positive attitude allows him to perform every task with a smile, there isn’t a job he won’t do. If he isn’t making the team laugh, he’s honing in on his skills on the jobsite. He prides himself on paying extreme attention to detail and trying his absolute hardest to reach perfection. When he isn’t at work, Luke enjoys playing guitar, cooking and fixing whatever he can get his hands on. 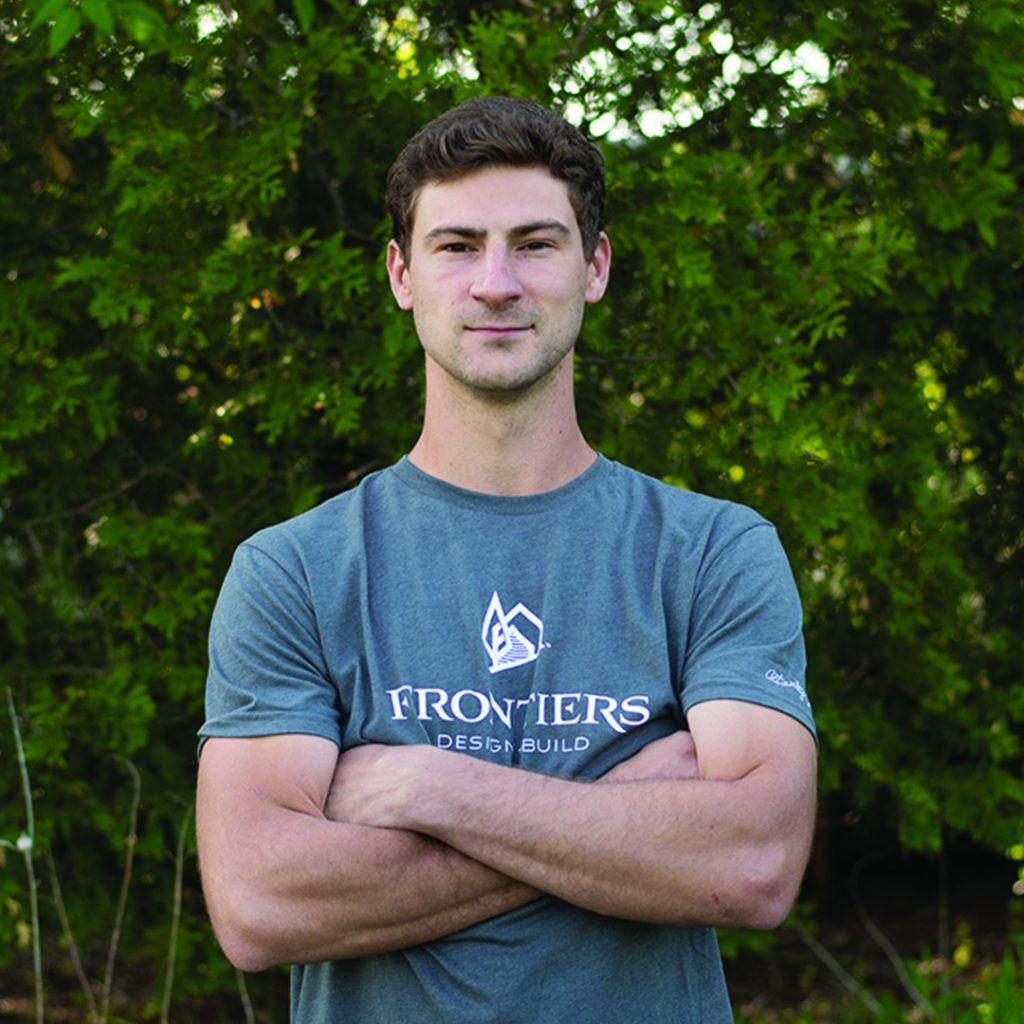 Graduate of the Mohawk College, Building Renovation program, Graeme began his career in framing, before coming to Frontiers. Graeme has a love for tools, snowboarding, golf, and his new truck! Graeme is known to be consistent not only for his dedication to quality and work ethic, but also for having a Jos Louis in his lunch every day. 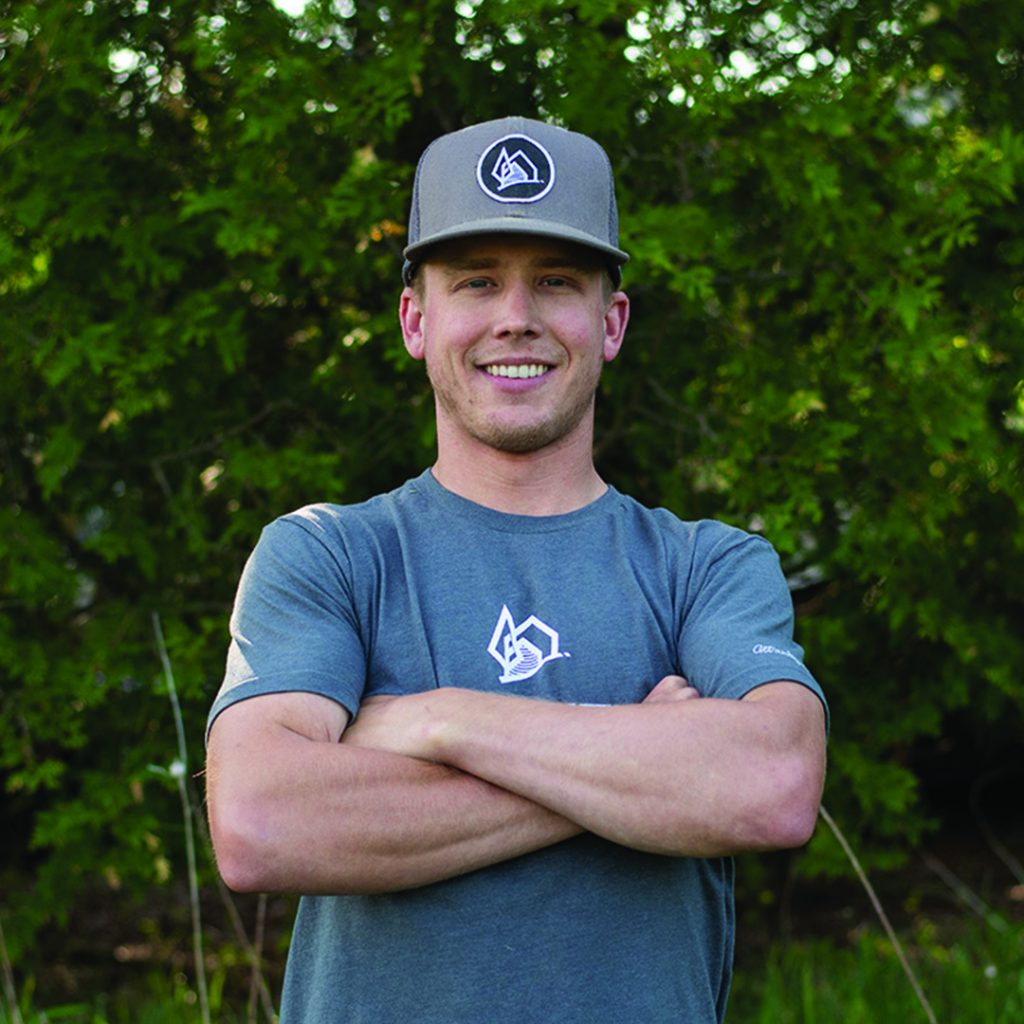 Liam is a graduate of Conestoga College from the Renovation Technician Program and is one of four carpenters on the interiors crew. As the newest member to the team, Liam enjoys developing a wide range of new skills. On his down time, he can be found spending time with his new pup snoop, playing some pick up hockey, or showing the other frontiers guys how it’s done on the golf course. 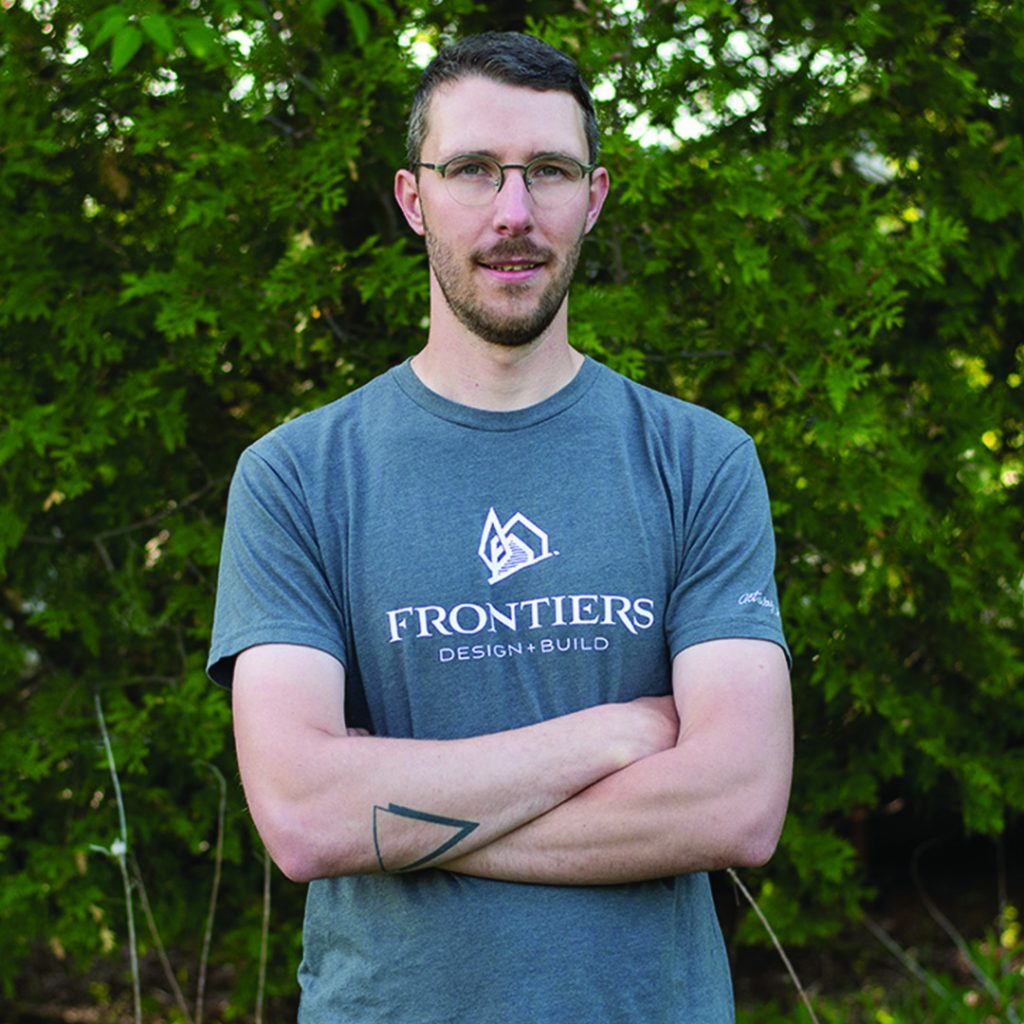 Brian grew up on a farm in Ireland and has always been interested in building and making things with his hands. With a degree in Agriculture under his belt, he made the move to Canada permanently in 2019 and hasn’t looked back. As one of the newest members of the carpentry team, Brian is excited to learn and develop new skills. Brian enjoys the outdoors, going camping with friends, and has recently bought a house in Guelph (now he can look forward to finally getting a dog). 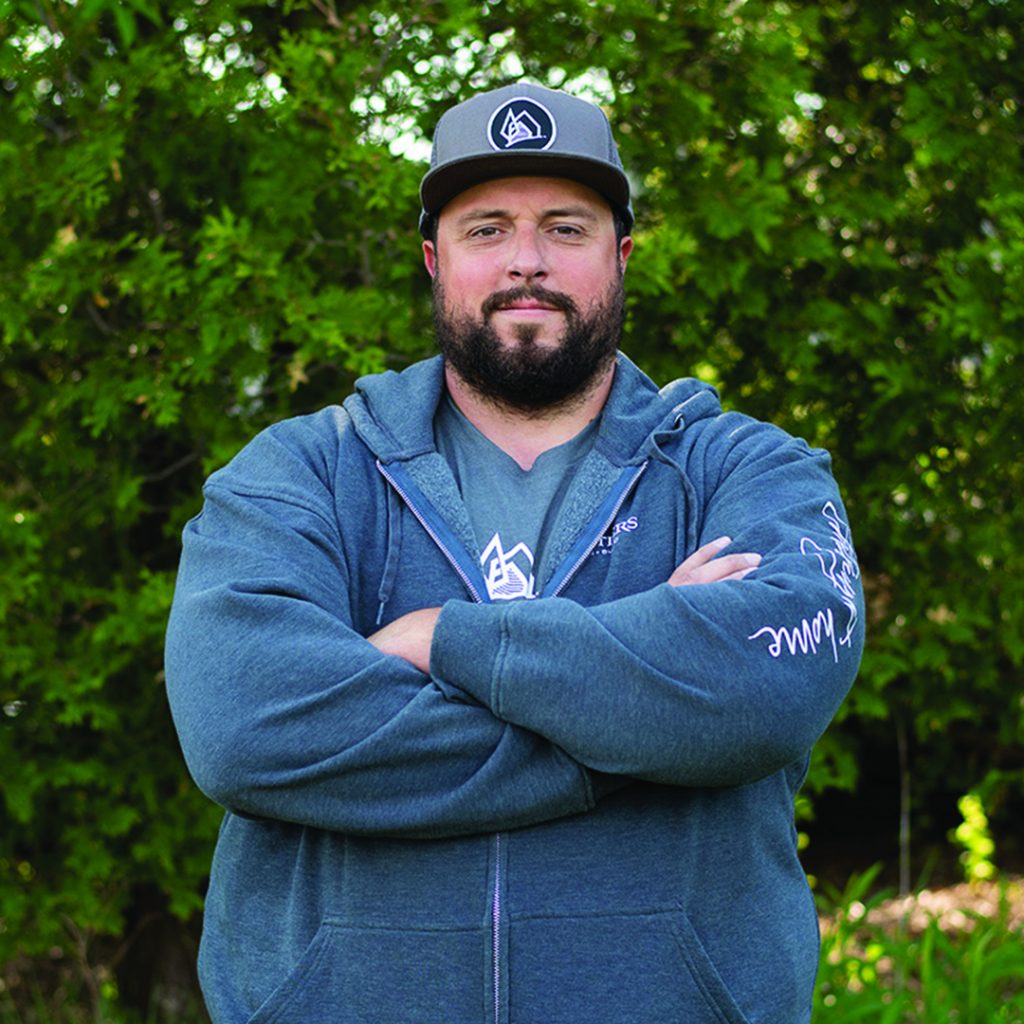 Jordan graduated from Mohawk college with a horticultural technician diploma. Jordan’s main role at Frontiers is logistical support and shop management. As time permits, you can also find Jordan helping out around our larger landscape construction sites. In his down time, Jordan likes to spend time with his two young children and his wife. He has a love for watching football, movies, eating icecream and collecting tools. Jordan has a strong work ethic and is very passionate in his work. 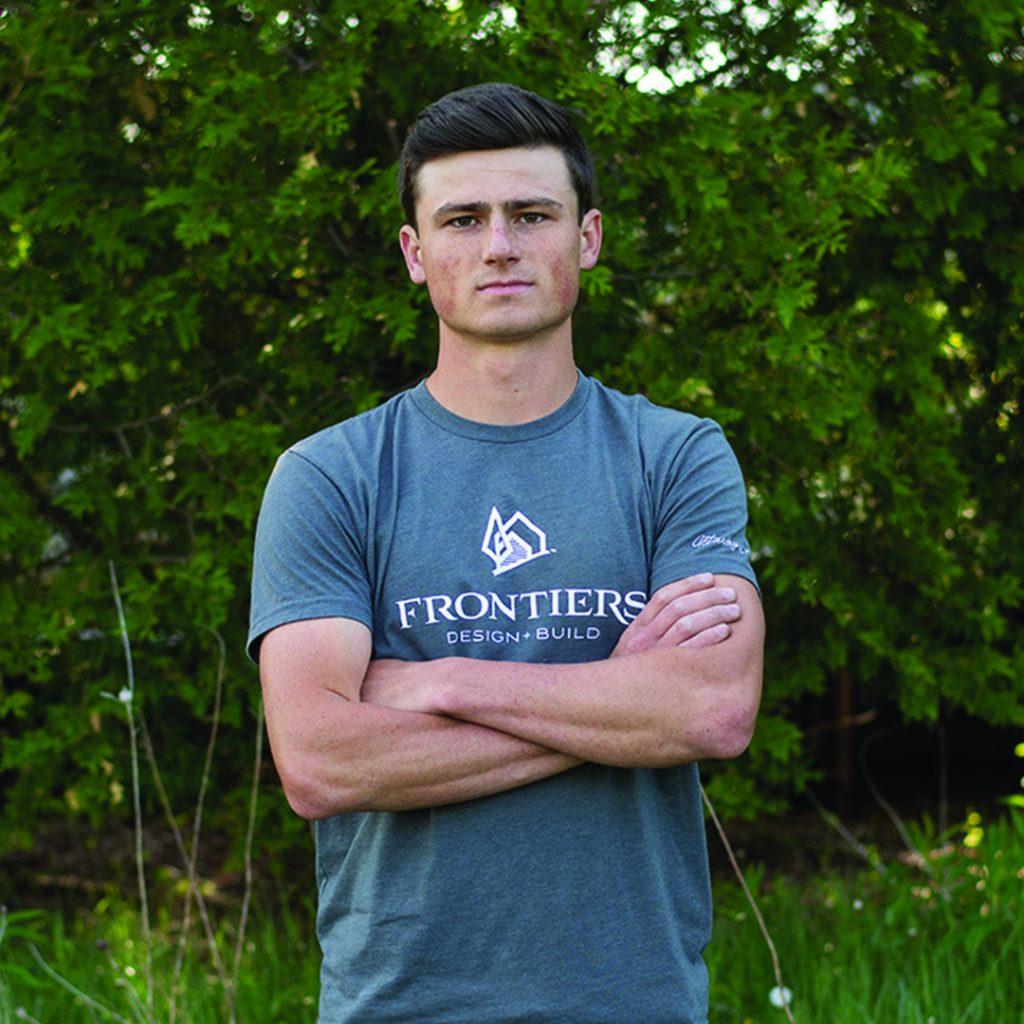 Ethan is pursuing a degree in Human Kinetics at the University of Guelph. He has past work experience in excavation, apartment renovation, and home construction and enjoys working on meaningful projects alongside passionate individuals. At the university Ethan also competes in cross country and track and field as a varsity athlete. When he is not running, he enjoys spending his time in anything else sports-related. 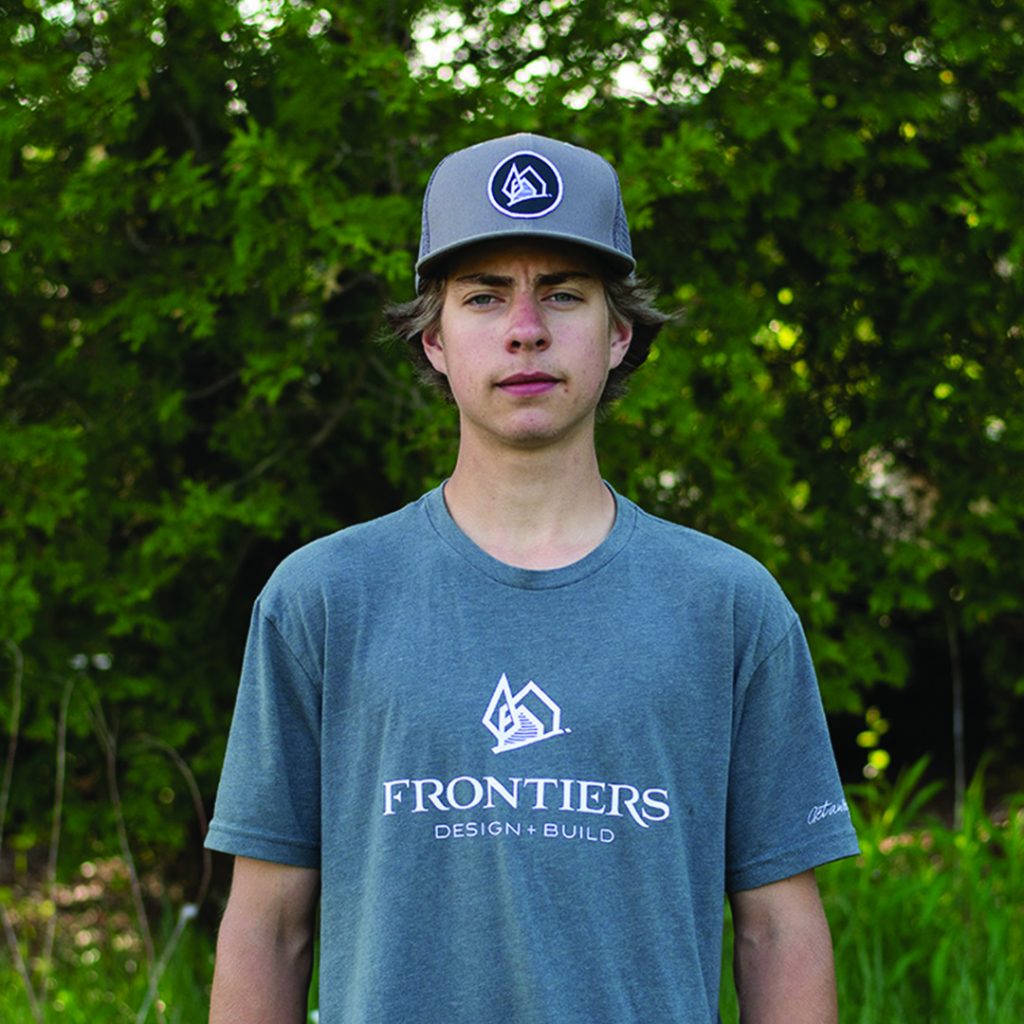 Blake went to Georgetown District High School and is now exploring a career in the trades. He likes spending his time at the dirtbike track, fishing, or fixing old trucks and tractors. His favourite part about work is running heavy equipment and seeing the finished product come to life.

we are almost always hiring

If you are looking for an opportunity to join a growing, talented team…We work on awesome projects for fantastic clients! 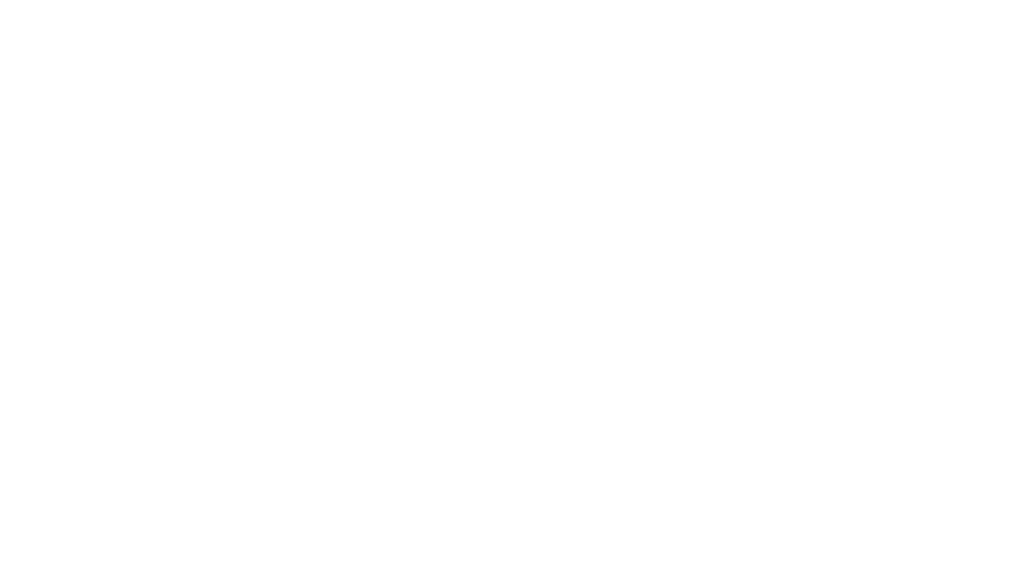